The painting of a student in Litochoro, a town in Greece, has been featured on the search engine’s central page for May 14. Asterios Reynik, a young pupil from the second elementary school in Litochoro, was the winner of Doodle 4 Google competition that took place in Greece and was open for all students from 6 to 18 years old in Greece.
The competition’s purpose was to encourage the students to use their creativity in order to design Google’s logo. The subject of the 2013 competition was My Greece and doodle reflects what young pupils think of Greece.
At the same time, Google strongly promotes Greek tourism by combining the beginning of summer with Greece, projecting the sun and the sea.
The title of young Asterios’ drawing is My Greece, Sun and Sea. The basic features of the winning doodle also includes the Greek flag. Through his children’s eyes, Asterios added a small boat on the sea and two seagulls on the sky. This is Greece for him – and many around the world, especially with tourism season getting into full swing and hopes of better times for Greece.
The voting was held from April 15 to May 7. The ceremony of the final winner’s announcement took place on May 13. The winner will be enjoying for 24 hours the number one position at the first page of the largest search engine, on May 14.
source: Greek Reporter
Αναρτήθηκε από Plakiassuites Rethymno Crete στις 8:59:00 μ.μ. Δεν υπάρχουν σχόλια:

Have a great May!! 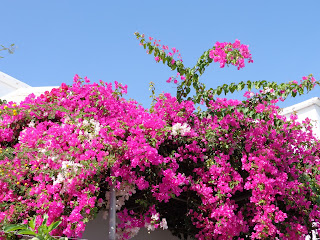