Many visitors to Crete always believe that the island is only for summer holidays. That's true and millions have discovered that while being on the long beaches or exploring the hinterland and the numerous historical places. But Crete is also a perfect winter destination. The island lies in the subtropical part of the Mediterranean and it offers mild winters with specially along the coast line many sunny days with pleasant temperatures. On the south coast you may find your self maybe a day on the beach and swimming in the cleanest seas of Europe.

January and February are the rainy months, but this you must see as maybe 1 or 2 days some hours with heavy rainfall... Very soon after this you will have sunny and dry days. Temperatures vary from 16-23 celsius at daytime. The Night can be cooler because of the hummidity and temperatures fall down to 10 celsius sometimes. Freezing cold you will find it only in the high mountains.

Winter 2013
Stay with us during the winter months!
December, January, February for a week.
For availability please contact us.


http://www.plakiassuites.com
In the local restaurants you may taste food that you don't find in the menus during the summer...
And of course, the prices for a rent a car can be very vevy cheap, depending on the period you need it! If you need an accommodation for the whole winter you will be surprised what good price you can get.
For more information, just contact us.
(source: tripadvisor, plakiassuites)

Travelers once again showed their preference for Greek destinations, as Greek islands occupied four of the five first places on the list of the 20 most popular holiday destinations in the Mediterranean region.
According to a research carried out by the travel metasearch engine focusing on hotels Trivago on the most popular Mediterranean destinations based on its users comments, Imerovigli on the island of Santorini, Greece, came first (with a popularity rate at 85%), while the traditional settlement of Fira, again on the Greek Aegean island of Santorini ranked second. Apparently, the natural beauty of the island persuaded for one more year the international travelers who gave it the first two places in their preferences. Capri in Italy ranked third followed by Chania, Crete, fourth. The top five is completed by Rethymno, Crete, while in the 17th place we have one more Greek destination that of Agios Nikolaos, Crete.
According to the list, Crete and Santorini come first in the mind of the travelers when they hear the word “Mediterranean.”  The list also includes six destinations in Italy, four destinations in Spain, two in France as well as Lagos in Portugal.
The 20 Most Popular Mediterranean destinations:
1. Imerovigli, Santorini 85
2. Fira, Santorini 82
3. Capri, Italy 81 (81,41)
4. Chania, Crete 81( 81, 32)
5. Rethymno, Crete 81 (81,27)
6. Lagos, Portugal 81
7. Syracuse, Sicily 81
8. Llanes, Spain 81
9. Monte Carlo, Monaco 81
10. Tavira, Portugal 80
11. Trapani, Italy 80
12. Alghero, Italy 80
13. Santa Margherita Ligure, Italy 80
14. Conil de la Frontera, Spain 80
15. Santa Eulalia, Spain 79
16. Marbella, Spain 79
17. Agios Nikolaos, Crete 79
18. Lignano Sabbiadoro, Crete 79
19. Saintes Maries de la Mer, France79
20. Alcudia, Majorca , Spain 79
(source: Greekreporter)
Αναρτήθηκε από Plakiassuites Rethymno Crete στις 11:56:00 μ.μ. Δεν υπάρχουν σχόλια:

Greek magic... photo of the day. 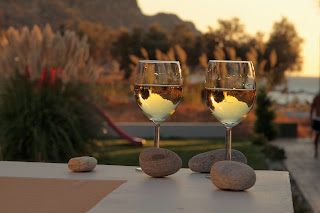 The Olympic Flame for the 2014 Winter Olympics has shone on the Acropolis hill since Friday afternoon when the torch relay across Greece ended.
On Saturday, the sacred flame which was lit last Sunday at Olympia, the birthplace of the Olympic Games, will start its trip towards Russia’s Sochi.
Before reaching the Acropolis in Athens, the flame crossed some 2,000 kilometers across Greece over the past few days, spreading the messages for friendship and peace.
The cauldron at the shadow of the Parthenon temple on the sacred rock was lit with the symbol of Olympism by Manolis Katsiadakis, the Secretary General of the Hellenic Olympic Committee which organized the six-day Greek leg of the relay.
It will be illuminating the Acropolis hill overnight, before being carried on Saturday to the Panathinaic stadium for the hand-over ceremony to the Russian organizers of the February 7-28 Games.
At the venue which hosted the first modern Olympic Games, Greeks plan to bid farewell to the Flame with a moving ceremony, sending their best wishes for good games at Sochi to the athletes and spectators.
(source: xinhua)
Αναρτήθηκε από Plakiassuites Rethymno Crete στις 7:06:00 μ.μ. Δεν υπάρχουν σχόλια: