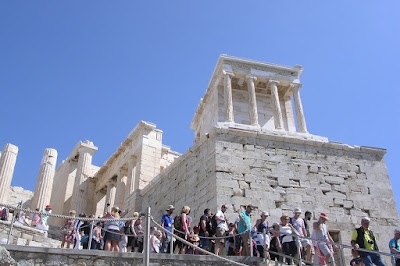 Greece is among the world’s safest destinations, according to a new travel advisory system announced Wednesday, by the US State Department.

Under the four-level advisory, Greece is listed as a “level 1” country, the lowest rating calling on travelers to “exercise normal precautions”,

“The State Department’s new Travel Advisory Program, launched today, assigns every country a level of advice ranging from 1 to 4.  Greece received a Level 1 – Exercise Normal Precautions rating that should have American tourists packing their bags to come,” said the US embassy’s Athens consular section via its twitter account.

‘Pack your bags and come’

Meanwhile, US Ambassador to Greece, Geoffrey Pyatt invited US travelers to come to Greece via his own twitter account on Wednesday: “Greece at the best level of the State Department’s new Travel Advisory Program. I’m looking forward to seeing even more American tourists here in Greece in the year ahead.” 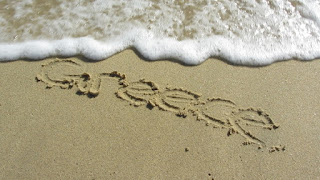 The ambassador added that “Greece is a pillar of stability in a volatile region, and the stronger Greece is, the stronger and more secure its neighborhood will be,” in a comment to Greek daily Kathimerini titled the “Road Ahead for Greece”.
US Ambassador to Greece Geoffrey Pyatt.

Pyatt went on to say that 2018 will be a critical year for Greece as it is on the verge of leaving the crisis. “The good news is that the Greek economy is showing renewed signs of life.”

Underlining the “resilience and spirit of the Greek people in the face of an unprecedented economic crisis”, Pyatt stressed that “Greece’s challenge now is to pursue a path that will bring renewed prosperity to its citizens, hope to its young people, and security to the region”.

The US diplomat concluded that obstacles must be overcome including those related to privatizations and economic reforms such as the “frequent changes in the tax and regulatory regime” which “risk scaring away foreign capital at the moment when Greece is poised to move forward”.
(Source: GTP)
Αναρτήθηκε από Plakiassuites Rethymno Crete στις 7:40:00 μ.μ. Δεν υπάρχουν σχόλια:

The cradle of Zeus, the cave of Idaion Antro, has always been the reason for Psiloritis to be glorified & regarded as sacred 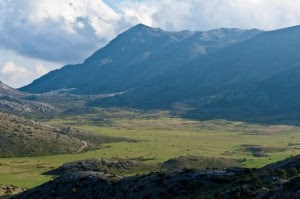 The stone giant of Crete, a natural border between the Earth and the Sky, dominates the whole of the island. Mountainous villages perched on the edge of a precipice; caves of unique beauty; impressing karstic formations; gorges in thick shade; plateaus and alpine areas; all that and many more make up the unbeatable scenery.

The mountain chain of Idi, also known as Psiloritis, unveils all the beauty of Crete under its snow-capped peaks: the White Mountains in the west; Mount Dikti in the east; the plain of Messara, the Asteroussia Mountains and the Libyan Sea in the south; Herakeion and Rethymno in the north.

In the Doric atmosphere of this rugged land, proud, dashing and strong men are bred to farm for a living and search for the real meaning of life in the simplicity and wisdom of nature.

According to Herodotus, Psilorits was once covered by thick forests where all the endemic Cretan species used to live.

The largest one of the few surviving forests is situated at Gergeri near Herakleion; it is the oak forest of Rouvas, home to the rare species of the local flora and fauna, such as the Cretan wild cat. Smaller forests are situated on the plateau of Vromonero, at Kroussonas near Herakleion, and at Zaros and Pardi, near Rethymno.

The non-forested peaks are ruled by birds of prey such as the bearded vulture, the golden eagle, the falcon, and the royal eagle. 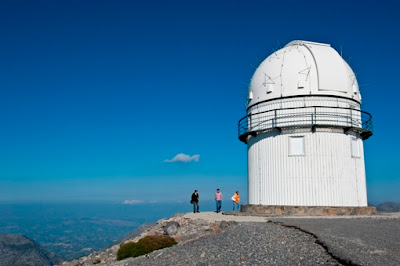 In 2001 the Psiloritis Geopark was founded and it is now part of the network of UNESCO Geoparks. Hiking on the mountain equals an ecological and geological delight in the heart of an awesome landscape.

At the shrubby foot of the mountain bloom iris and crocus flowers, along with other wild ones, that have been decorating the land of Crete since the Minoan years. Among the wonders of nature, let us mention the springs at Spili, Lake Votomos at Zaros, the gorges of Agios Nikolaos, of Vorizia, and of Almyros.

Last but not least, at the area of Zoniana there is one of the most significant caves in Greece with impressing stalactites and stalagmites, named “tou Sfendoni i Trypa”. 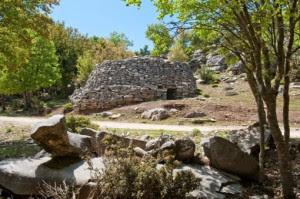 The cradle of Zeus, the father of Gods and humans, the cave of Idaion Antro has always been the reason for Psiloritis to be glorified and regarded as sacred.

The largest well-preserved Minoan mansion lies at the archaeological site of Zominthos.

Christianity has left its mark here too: on the peak of Timios Stavros (2.456m) the highest one of the mountain chain, stands the stone church by the same name (meaning “Holy Cross”).

Some more religious points of interest include the legendary monastery of Arkadi, as well as those of Diskourio and Chalepa. 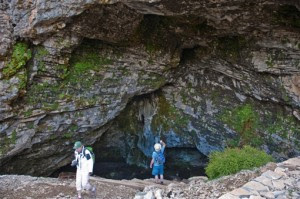 The road to the top!

Hiking to the top will be an arduous task, especially in the winter.

Take along your equipment and sufficient water supplies (no water available after 1.500m) and brace yourselves for a long and difficult walk.

The path E4 is the best marked one starting at the plateau of Nida. Once on the peak of Timios Stavros, seek refuge in the church and enjoy the breathtaking view.

The international event Psiloritis Race will be a perfect alternative for those visiting the area next June.

What is more, you can do mountaineering, caving/spelunking, paragliding, mountain biking, and climbing, or opt for off road jeep fun. 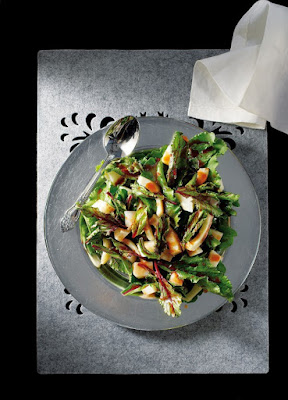 Make this nutritious salad, add some fresh cheese if you like and enjoy it as a light dinner along with crusty bread.

Step 2
Toss all salad ingredients in a bowl and arrange on a serving platter.