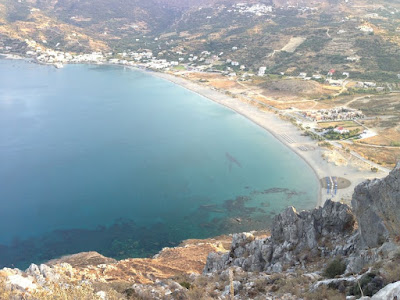 Plakias Village, on the south coast - directly south of Rethymno about 30 km south of Rethimno small town. It is part of the municipal unit Foinikas.

This is quite a busy tourist destination, but has a unique feel, which appeals to some who normally choose to stay in smaller, quieter places. Beautiful surrounding countryside, fine walks and gorges.

Plakias is surrounded by mountains to the north and the Libyan Sea to the south. The name in Greek means "flat" but the approach and coastline are quite mountainous and dramatic.

Small hotels and many beachfront restaurants & cafes. The large crescent bay of sandy beach and the harbour provide a varied and yet not too busy destination.

Frangokastello and Sfakia is a pleasant twisting and scenic short drive. Above Plakias, Myrthios, affords gorgeous views of the bay, coastline and sea. 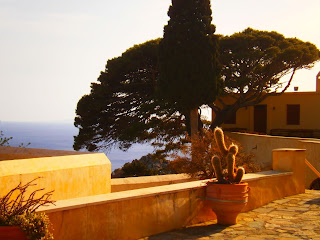 The gorges of Prevelli (and the monastery), Kourtaliotis and Kotsifos are easily visited.In addition visit the mountain village of Spili, Preveli Monastery and Preveli beach and the wonderful villages in the hills on the road to Sfakia.

The name in Greek means "flat", because the town stands on an alluvial fan of material that has washed down the Kotsifou gorge directly to the north.

This material has formed along the sea's edge into a long, fine, gold-hued sand beach, which shelves very gradually out into the bay, making it quite safe for swimming and hence, for family holidays.

Initially just a fishing jetty and a few houses, Plakias developed during the last few decades into a tourist resort. The first official mention of Plakias was in 1961, when it was recorded in a census as the permanent home of six fishermen. 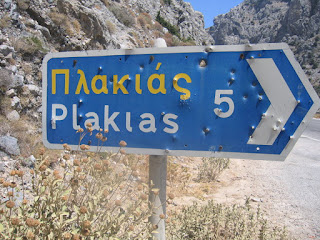 The recorded history of surrounding mountain villages like Myrthios and Sellia goes back to the 10th century, when the Byzantine Emperor Nikephoros II Phokas (961 AD) built roads and bridges in order to link those villages, and there are some fragments of wall remaining from a fortified area on a hill top just northeast of the present main town .

The local area is geographically suitable for a settlement, having plenty of agricultural space, and there may well have been a settlement there since Minoan times .

How to get there

In summer there are six buses a day from Rethymno (€3.50, one hour). Have a look at Buses timetable.  Some of these buses go via Preveli Monastery. The Plakias bus stop is on the seafront taxi rank .

It’s possible to get to Agia Galini from Plakias by catching a Rethymno bus to the Koxare junction (referred to as Bale on timetables) and waiting for a bus to Agia Galini. The bus stop has a timetable. Or we recommend that you should rent a car in order to discover better the area.

Parking along the main town road is difficult in high season, but visitors should note that there is a large, free parking area just east of the main town .

There are plenty of places to eat along the sea front with the biggest cluster of tavernas at the west end.

Beaches. Plakias has a 1300 metre long sandy beach and there are several other beaches within walking distance (Souda, Damnoni, Ammoudi and Skiinaria). The south-eastern end of the beach, near the Kakomouri headland, is used by nudists.

Damnoni beach is worth visit out of high season, despite being dominated by the giant Hapimag tourist complex.

To the weast is Souda, a quiet beach with a couple of tavernas and further west is the Polyrizos-Koraka beach.

And of course the well-known palm-studded beach of Preverli whiich gets very busy in Summer, therefore the remote and peaceful Agia Fotini, Ligres, Triopetra, and Agios Pavlos are perfect for stress-free escapes surrounded by photogenic splendour and popular with yoga and meditation groups. An area where there is no  megaresort to distort the idyllic ambience, just a few lone tavernas with modest rooms.
Strong summer winds are common on these beaches.

To the east (8 km) is the historic Monastery of Preveli, which may have been founded as early as the 10th century CE. Due to its isolated position, it has played an important role in Cretan revolts against occupying forces such as the Nazis in World War II.

Hiking. There are plenty of walks locally, and bolder walkers will enjoy the high green country beyond the coastal mountain range north of town . Mountain biking and cycle touring are other local attractions. There are well-worn walking paths to the scenic village of Selia, Moni Finika, Lefkogia and a lovely walk along the Kourtaliotiko Gorge to Moni Preveli. An easy 30-minute uphill path to Myrthios Village begins just before the youth hostel. 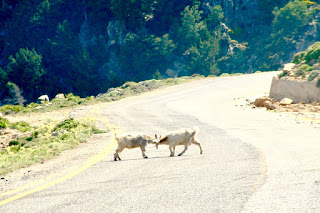 Diving. Several diving operators run shore and boat dives to nearby rocky bays, caves and canyons, as well as all manner of courses.

Birdwatching. Lots of bird species, migratory and other, build their nests and lay their eggs near the coast. On Nature’s path to the north of Plakias, both Kotsifos and Kourtaliotis gorges shelter rare and endangered species like the “Royal Eagle” or “Eleonora’s Falcon”.

Nature lovers. The herbs in the area are worldwide known for their variety and their healing power. Plants like the Cretan Tulip, the Cretan Saffron and many more are part of a unique ecosystem in this area.

Villages. Visit the small postcard-pretty villages draped across the hillside above Plakias, one of them is Mirthios with a couple of excellent tavernas, both with bay-view terraces.
(source: crete travel)
Αναρτήθηκε από Plakiassuites Rethymno Crete στις 12:20:00 π.μ.